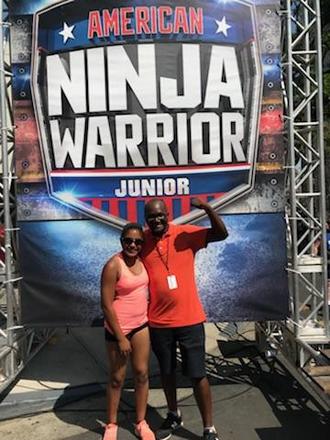 When Analise Grady first walked into Gymja Warrior in Danvers three years ago, she had no idea that her life was about to change.

The then-11-year-old from Billerica and her sisters told their father, LaShadric, that they wanted to try the same obstacles they saw on the popular American Ninja Warrior TV show. After his good friend Kristina Boldebuck did some research and found Gymja Warrior, LaShadric and Kristina took their daughters, Analise and Naomi, to an open gym and after just a few hours they were hooked.  Over the last three years, Analise and Naomi have rarely missed a week going to Gymja Warrior and the trip to Danvers has become a part of their regular routine.

Fast forward three years and Analise is anxiously anticipating the premier of “American Ninja Warrior Junior,”  a new “American Ninja Warrior” spin off that she will be featured on after being one of 192 kids to be selected out of more than 12,000 applicants. The first of 20 episodes airs Oct. 13 at 7 p.m. on Universal Kids, NBCUniversal’s cable network for kids.

“It’s exciting,” says Analise, now 14 and a freshman at Billerica Memorial High School. “It was a great experience and I can’t wait to finally sit down and watch it on TV.”

Of course, being chosen to compete in American Ninja Warrior Junior did not happen by the luck of the draw. Analise has dedicated herself and has put in hours and hours of training over the last three years,, with much of that hard work taking place at Gymja Warrior.

Here are five things you need to know about Analise before seeing her appearance on American Ninja Warrior Junior.

2.       2017 made her the “Queen of Firsts”
Analise is a well-rounded person and her success as a ninja athlete is just the tip of the iceberg.  In addition to her success on the National Ninja League stage last year, she was also named to the first USA Softball Region 1 All American team in the summer of 2017 as a pitcher and outfielder. What’s more, she was part of the 2017 Locke Monsters Robotics team from the Locke Middle School in Billerica that became the first middle school in the state to reach the quarterfinals at the VEX World Championships in Kentucky. 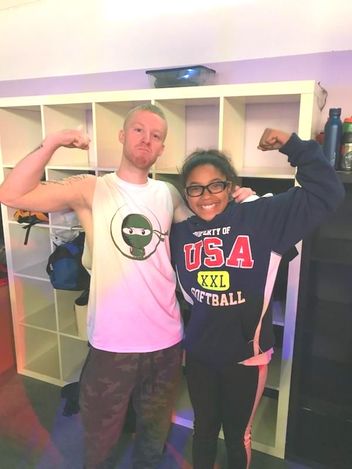 3.       Gymja Warrior played a major role in her development
When Analise first became a member at Gymja Warrior she was 4-foot-6 and about 60 pounds. But after attending classes at Gymja Warrior religiously every Tuesday night, often working with Master Sensei VInce Klapper, a 2015 contestant on American Ninja Warrior, she quickly started to gain strength and muscle, which, in turn, helped her tremendously in other sports.

“Now, she’s a 5-foot-4, 130-pound piece of muscle,” says her father with a laugh. “The best part is, she never considers going to Gymja as ‘working out’ because she has so much fun doing it. She didn’t even realize how much the cross-training was actually helping her in other sports.”

4.       She spent five days in LA this summer taping the show
Analise and her dad were flown out to Los Angeles in July and spent five days there for the taping of the show. American Ninja Warrior Junior is different from American Ninja Warrior in that the competition is a NCAA-bracket-like format where participants take on each other head-to-head until a champion is decided. The courses feature well-known Ninja Warrior obstacles, including the Archer Steps, Tic Toc, Devil Steps, Floating  the Flying Shelf Grab, and the Warped Wall. Analise competed in the 13-14 year old age group that had Meagan Martin and Kevin Bull as mentors.

In addition, the crew from “American Ninja Warrior Junior” came to Billerica in August to do a hometown shoot of Analise, getting footage of her at home, doing robotics her team and on the softball field as part of  her competitor profile on the show. Currently, there are “Meet the Ninja” segments available on most on demand cable TV platforms.

“All I can say is that I had a blast out in LA and met a lot of really cool kids and ninja athletes and made some friends,” Analise says. “I was nervous and excited all at the same time. And I feel like I did my best. But that’s all I can say.”